Three concrete panels measuring roughly 7x8 metres were sandblasted with a design featuring art by Tony Thorne and poetry by Pete Hay on Friday. They will form a large section of the new gymnasium at Risdon Prison. ﻿﻿﻿

Fierce parochialism is a Tasmanian tradition. To mainland Australians, this can seem extraordinary. How can an island so small remain so divided within itself? Do southerners really refuse to drink ‘northern beer’, as I once joked at a BBQ in Victoria?

As I sat down to read Last Days of the Mill, I did so as a Hobart-born woman now living in Launceston. An hour-and-a-half’s leisurely drive from Burnie, yet so far away. If I needed any reminder that I’m clueless about the life of Burnie’s mill-workers, I found it by the first page.

Pete Hay undertook a writer’s residency in Burnie during 2010-2011, using the time to research and interview workers of Burnie’s (now closed) Pulp Mill. His resulting poetry is uniquely stunning.

In his notes about the poems, Hay is at pains to stress the intrinsic value of vernacular language. He supports the idea that ‘the word in the air is not the same word on the page’.

…The task is to do justice to non-literary speech in a manner that avoids condescension and does not result in the substitution of the superficially quaint for the real dignity of the speaker and the communicative complexity of his/her message. [p. 98]

Comprehensively achieving Hay’s objective, the poems present richly varied, complex characterisations. The book is steeped in the ambivalence so characteristic of humans reflecting on events past. Nuanced and flowing, the narrative is both compelling and unfamiliar.

The people Hay interviewed are ‘skilled communicators, their vocabularies large and richly deployed, their recourse to metaphor and simile inventive’ [p.98]. Hay has used some of this metaphorical speech as titles for the ten poems. Just a glance at the list of poems is enough to excite anyone interested in words. ‘Clean as a Peeled Egg’, ‘Slow as an Old Wet Week’ and ‘Christmas on a Stick’ sit alongside ‘Crook as Maggoty Mutton’, ‘Shit Sandwich’ and ‘Th Duck’s Guts’. So fresh are these titles, I wondered if the poetry itself would disappoint with impenetrability. It didn’t.

Hay is a tale-weaver. He has an eye for political controversy, but Hay lets those closest to the drama tell the story. This is not an editorialised agenda-driving book. In style it is in fact closest to oral history.

Accompanying Hay’s poems is artwork from Tony Thorne. Thorne ‘learned to draw on the Burnie Bond paper my grandfather would bring us from the Mill’ [p. 101]. Arriving at the Burnie Mill in June 2010, Thorne captured some of the last hours of operation. Sketching fast as well as taking photographs, it is clear that Thorne was moved by the Mill’s imminent closure:

The Mill was always there, from way before I was born. Its hum rumbled through the steep valleys of Burnie. [p. 101]

Nowhere in Tasmania has a town’s existence been more entwined with a factory than Burnie and the Paper Mill have been. For many decades it linked every person. [p.103]

This view is emphatically supported by the voices of the people in Last Days of the Mill.
Not just the men, either. As well as observing some of the working conditions at the Pulp Mill, Last Days of the Mill homes in on the strike of 1992. Hay has interviewed people from differing viewpoints – the strikers and their spouses, the ‘scabs’ who defied the strike and went to work, the security officers – they’re all here in detail. This is not a book that comprehensively explores the delicate (or indeed indelicate) political wrangling surrounding the strike. But it certainly doesn’t deny the context.

The voices are strong, whether talking about the Mill, the weather, or the picket lines. There are loyal statements – ‘we was a pulp family from way back’ (p.24) – and camaraderie: ‘the picket brings y’close t’people’ (p.26). There are affectionate remembrances at every turn: ‘She’s a thing, this picket’ (p.25).  There is excitement, danger and hope. Sentimentality about employment conditions – ‘Th old Pulp was good to us’ (p.28) – contrasts with details about the risks involved in mill work. Tales of injuries to send you queasy, reference to retirement health problems; all this is relayed through the voices Hay has captured.

As a child I can remember visiting Burnie, thinking of it as a dark, smelly, polluted place because of the Mill. I had no concept of the social implications of the Mill’s presence – I only knew that it was a polluter, a tree-eater, and therefore a ‘bad thing’. Last Days of the Mill has given me a broader perspective.

Yet it wasn’t written for the likes of me. It is in some respects a tribute to the people of Burnie. Not that the Burnie community doesn’t have an identity anymore – but it is different now. Last Days of the Mill, in Pete Hay’s own words, is a testament ‘to the generous and large-hearted ‘pulpies’ of Burnie who provided the stories and the ways of strong Tasmanian speech that I have striven to valorise’ [p. 99].

Last Days of the Mill is a spectacular rendering of some important Tasmanian voices. Innovatively constructed, evocative and delightful, it will be widely read and treasured.■

The Tony Thorne/Pete Hay collaboration continues. Hard on the heels of Last Days of the Mill comes our latest art-with-poetic text achievement, this time a series of ten laser engraved wood panels, themed around life and landscape in the mid-Derwent Valley and the Central Highlands. The panels will find a permanent home in the Central Highlands Community Health Centre, Ouse in the next few weeks. The panels measure 1.2 metres square. The first image below is one of the panel designs, the others show the engraving process where each mark and letter is redrawn by the laser. 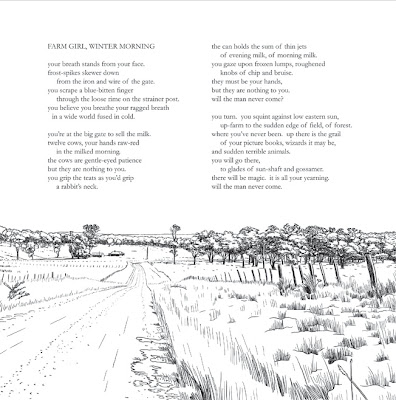 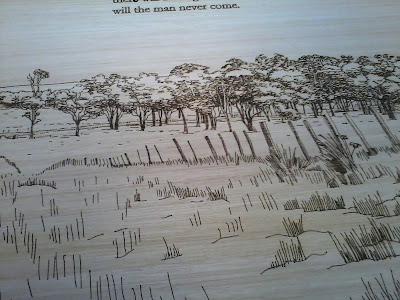 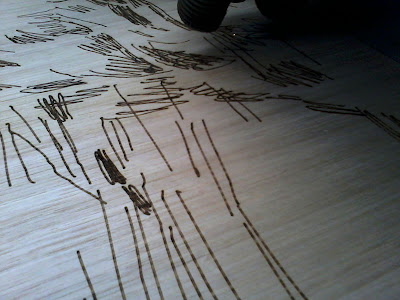 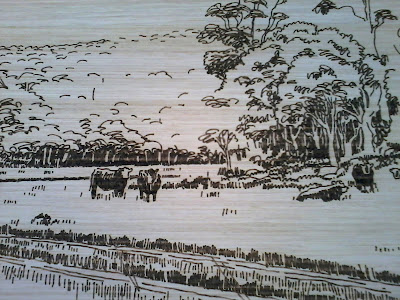 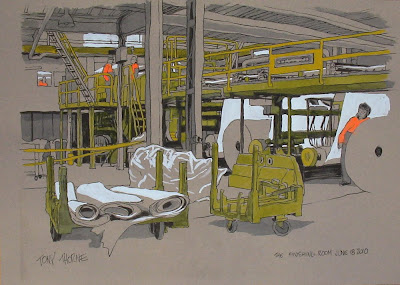 Pete Hay and Tony Thorne are continuing their collaboration in words and pictures with two recent public art commissions.

The first is for the Central Highlands Health Centre at Ouse, where we will be making art for the central corridor inspired by the scenery of the area and the stories of the locals. (Top two images).

The second is for the new gymnasium and walkways at Risdon Prison. The bottom image is a style guide for what will be sandblasted at a huge scale onto the gymnasium wall. 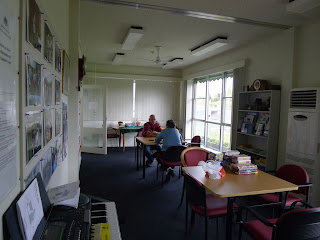 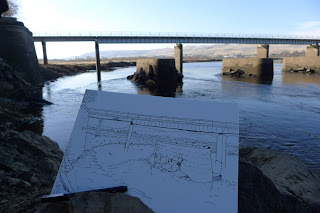 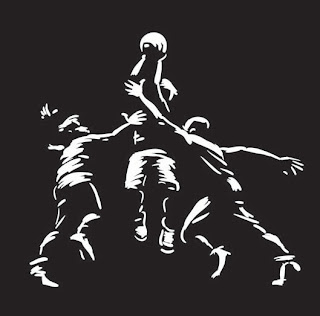 Buy books, original prints and postcards at our new shop: 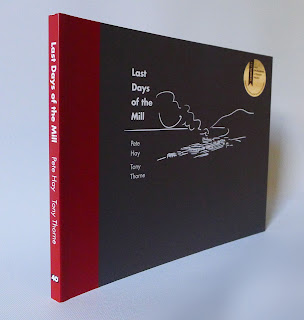 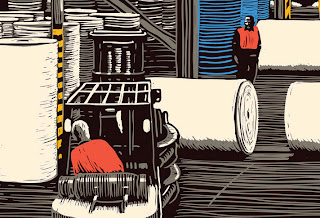 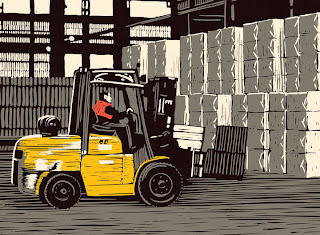 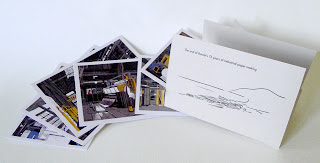 To order contact us at lastdaysofthemill@hotmail.com.
The closure of Burnie's iconic 'Pulp' through the eyes of a poet and an artist.
Released by 40 Degrees South Publishing.
For seven decades 'The Pulp' constructed the social, economic and environmental circumstances of life on the North-West Coast. In 2011, on the last day of its operation, artist Tony Thorne went on site armed with sketchpad and camera. And writer Pete Hay came to Burnie armed with notepad and recorder, to talk to displaced mill workers. The result is this extraordinary collaboration of dramatic monologues in the vernacular voice of the mill floor and artworks of stark, confronting beauty that vividly capture the dying days of an industrial colossus.

Pete Hay was born and raised on Tasmania's North-West Coast. He is a poet, essayist and social theorist who taught geography, politics and philosophy at the University of Tasmania until he retired to get a life. He has worked as a political minder, and has dabbled in activism and public affairs commentary, but is a refugee from all that, too. His once-endless slate of interests have now shrunk back to the beauty within language, music, cricket, football, the extraordinary cacophony of life on earth - and the marvellous stories that ordinary people carry with them. Except that he is of the opinion that no person is truly ordinary. His most recent publications are Main Currents in Western Environmental Thought (social theory), Vandiemonian Essays (personal essays), Silently On The Tide (poems) and, with the photographer Matthew Newton, the photo essay with text, The Forests.

Tony Thorne is a Burnie boy. He is an animator, an illustrator and an artist who learned to draw on the Burnie Bond paper his grandfather would bring home from the mill. In the summers while at art school he would work maintenance shut downs at the mill.
He has illustrated books of Tasmanian aboriginal poetry and worked for magazines such as Australian RollingStone. He has animated on many feature films including several in the Harry Potter series. His art for Last Days of the Mill has been exhibited in both Burnie and Hobart and some of the works are now held in the Burnie Regional Art Gallery collection.